Domestic stock market averages have recovered from the Crash of 2020, and are now in positive territory. The crash was historic in its velocity down as well as its speedy recovery. Investors are definitely feeling a sense of relief, but are we out of the woods?

The benefit of history is that it provides perspective. The U.S. economy entered into a recession in February. How does this recession compare with past ones in terms of severity? One indicator is jobs, or more specifically, jobs lost. The Bureau of Labor Statistics puts out monthly jobs figures and this month’s print was a doosey!

Economist’s job loss estimates were off by a mere 10 million jobs, a stunning miss. As expected, markets erupted euphorically with doubters throwing in the towel and propelling indexes into positive territory for the year. Greed has once again triumphed over fear.

Looking at the chart below, compliments of the Washington Post, may give euphoric investors pause. The light grey lines depict job losses since WWII, as well as the 2008 recession in green. Our job losses (in red) PALE in comparison with contractions over the past 75 years. 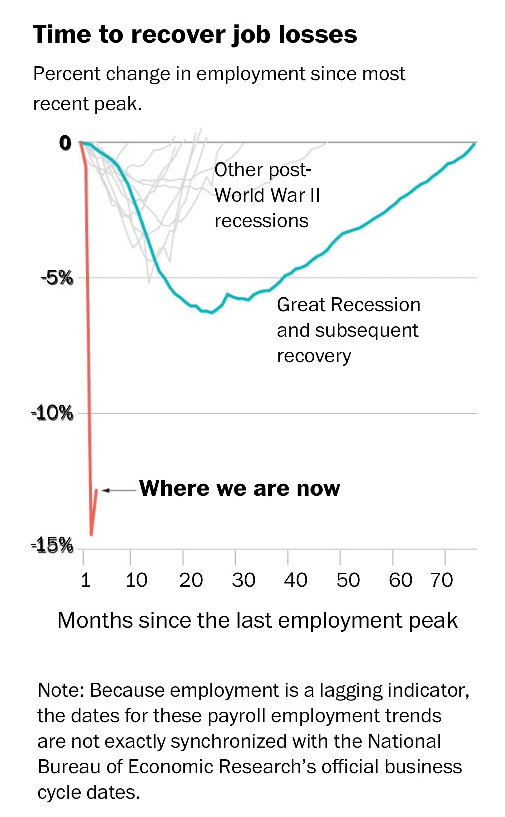 When observing the vaunted bounce off the bottom, one can’t help but wonder how much longer it is going to take to climb out of this massive hole. It took all of 6 years to recover from the 2008 recession. On average it has taken 2-3 years before jobs lost in past recessions have been recovered.

Massive stimulus from the Fed, as well as the federal government, has served as a balm for markets and displaced workers – but that aid will be coming to an end sooner rather than later. Recovering markets may give politicians cover for not exploding the debt further. You remember Dr. Anthony Fauci? He just commented that the virus was his “worst nightmare…in a matter of four months it has devastated the whole world…and it isn’t over yet.”