Economist and investors have long been pondering the cause of the structural decline in interest rates over the past 40 years, blaming stubbornly low inflation, low growth overseas and the recent financial crisis. But is the explanation something much more simple?

The chart below shows the 10-year Treasury yield (blue) versus the ratio of people age 20-34 to people age 55+ (show in red, the line declines as the population ages). The two lines appear very closely correlated. The idea would be that younger people are net borrowers (with their demand for money causing rates to rise) and older people are net savers (with their supply of money causing interest rates to decline). In its most simplistic form, the argument for why rates have gone down is simply that, as the populations ages, there continues to be more savers than borrowers. 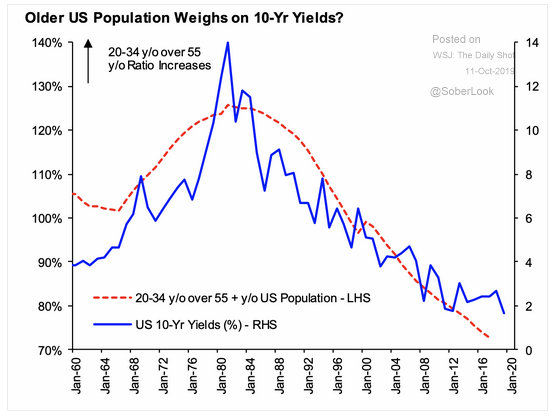