Flush with cash after the new tax bill, S&P 500 companies reporting earnings so far have repurchased $158B of their own stock in the first quarter, on pace for the biggest amount on record. This has come at a critical time for the market, counterbalancing the $29B pulled from U.S. ETFs and Mutual Funds in the first quarter, the largest three-month stretch of redemptions by investors since 2016.

According to the Wall Street Journal, “Of the 20 S&P 500 companies that spent the most on buybacks over the first quarter, nearly three-quarters have outperformed the index so far this year. The group has risen an average of 5.2% in 2018, compared with the S&P 500’s 1.9% gain.” 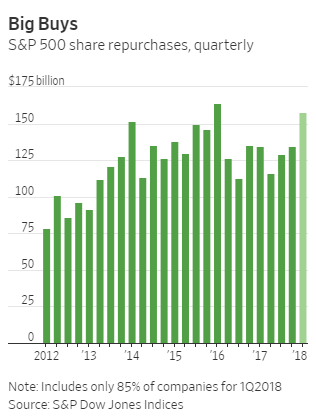