The stock market’s seemingly unending rise has caused the pundits to harken back to the days of the dot-com era, citing cautionary tales of “bubbles” and “irrational exuberance”, all the while stirring excitement and traffic to their websites. Here’s just a small sampling of current headlines:

First, it should be noted that the stock market has been routinely characterized by pundits as a “bubble” on or off for the last five years. Here’s one such headline from 2013 (the market is up by more than 50% since):

Second, while the pundits are correct to point out that the market’s current price-to-earnings ratio or P/E (a standard measure of valuation) is higher than at any time in the last fifty years save for the dot-com era, there happens to be a perfectly logical reason as to why.  And this reason suggests stocks aren’t overvalued after all, and in fact, could move higher heading into next year.

Saying the market is overvalued based on the P/E ratio alone (and ignoring interest rates) is similar to saying an individual is overweight based entirely on pounds (and ignoring height).

That’s because P/E ratios are strongly correlated to interest rates: when interest rates go down, Price-to-Earnings ratios go up, and vice versa. Interest rates, as it happens, remain at one of their lowest points in fifty years.

What explains this relationship? Stocks and Bonds represent trade-offs to each other. When interest rates (bond yields) are low, investors will be willing to pay more for stocks (thus accepting a lower rate of return in the future) given the comparably low return on bonds. Conversely, when interest rates are high, investors will sell stocks until valuations are sufficiently low enough to earn a comparably high rate of return to bonds.

This phenomenon has occurred throughout history and puts today’s market valuation into the necessary perspective.

The first two columns in the chart below show the relationship of stock market P/E ratios and interest rates (10 year Treasury Yields) dating back to 1970. The connection is unmistakable. As interest rates decline, P/E ratios rise, and vice versa, in a seemingly linear fashion. 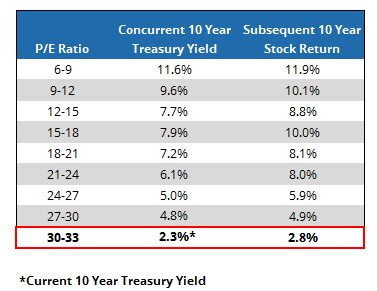 So where does that leave us today? The current P/E ratio for the market is 31 (range highlighted in red), above historical averages. However, looking at the chart above, we can see why. With very low interest rates (10 year Treasury yield currently at 2.3%), investors are simply honoring the “trade-off” between stocks and bonds that has existed for decades, paying more for stocks today and accepting a lower return in the future (subsequent 10 year stocks returns from here average +2.8%), because bond yields are also low.

Bottom line is this market is not built on “exuberance” or “wild speculation”, as the pundits would lead you to believe, but instead is behaving in a completely logical and rational fashion.

While acknowledging that longer-term returns will likely be subdued from here, we do not believe the market is currently “overvalued” or in need of pullback in the short-term. In fact, the overall macro climate remains very favorable to company earnings growth (tax cuts, improving global economic growth) supporting stock prices moving moderately higher into next year.

The next logical question, of course, is will interest rates remain at these levels, continuing to support current stock valuations? While we will cover this topic in detail in an upcoming blog post, the short answer is we think a significant move higher in rates (reaching yields of 4-5%) remains unlikely.