With the Republican tax plan making headlines on a daily basis and the stock market steadily rising, it’s easy to assume the former is causing the latter. But does the market really consider tax cuts to be a “done-deal”? And will a failure to pass legislation mean almost certain doom for stocks?

To answer these questions, we have to first understand what a “bet” on tax cuts would look like. While few details are known, we think these trades would ultimately stand to benefit should tax cuts be enacted as planned:

Is the market indeed making these “bets”?

The chart below shows the performance of these trades from:

Two things become immediately clear: 1) All trades remain unprofitable over the course of this year, meaning, if anything, this year’s rally has been a bet against tax cuts, and 2) while the market has seemed to take greater notice of tax cuts more recently, the overall impact remains relatively muted.

Why is the market taking a wait-and-see approach?

While there is no doubt that tax cuts in general will provide at least a short-term boost to stocks, several factors are likely giving the market pause:

What should investors do?

While it remains a possible catalyst heading into next year, we ultimately don’t think tax cuts will make or break this market.

This year’s rally has been predominantly driven by strong earnings (particularly from large growth companies such as Facebook, Amazon and Apple) and the larger theme of increasing Global economic growth (see chart below for more on how global growth is impacting 3Q earnings). For the first time in a decade, the global economy (from Europe to Japan to Emerging Markets) is expanding in unison, and we think this will likely continue into the foreseeable future whether or not tax cuts are achieved in the U.S. 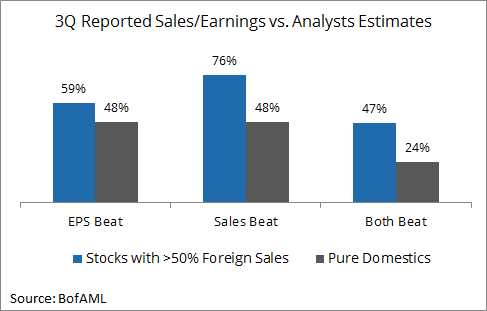